Live and learn.  I’ve been doing the mobile notary thing for several years now without any major surprises…..until last week.

It’s common to go to a home where there are pets and the pets rule the roost. They are harmless for the most part. Last week however, I went to a home for a routine signing. A woman came out onto the porch closing the door behind.  I could hear a dog barking inside the house.  She asked if I was afraid of dogs.  As a general rule I am not and said so. 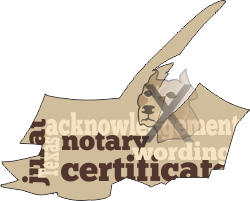 As I walked up the side walk she continued to say how the dog barked a lot but was really an easy going, gentle guy. I walked in and she closed the door behind me. She continued walking down the hall and as I took a step this huge pit bull bound from an adjoining room between us. I backed up against the door as it rushed me.

My hands were full and every time I moved, the dog barked and moved closer.  His head was at waist level.  The woman, who turned out to be a caregiver,  tried to get the dog to follow her into another room but he was having no part of it.  He wouldn’t even look in her direction.  Once he followed her a bit but was back before I could take a step or turn to get out the door.

All during this time, the lady I was there to see was calling from another room, trying to calm the dog.  I knew that she was somewhat disabled because she told me she couldn’t leave the house. She kept saying “Come on back.” The caregiver kept saying “He won’t let her!”

He backed up and I thought he was leaving.  As soon as I moved he was back. This time he snapped at me.  I felt a twinge near my navel. There was no time to think about it because I was concentrating so hard on remaining still and watching him but not looking him directly in the eyes.

The caregiver continued trying to draw the dog away and she finally went for food. The dog followed her into the kitchen which gave me a break to get to the signer and close the door to her room.  In retrospect, I probably should have turned and exited through the front door.

Later, the dog followed the caregiver into the signing room. I was sitting, trying to sign and stamp papers when the dog decided to incessantly lick my arm. Licking and slobbering so much that drool was running down my arm to my elbow! I was seriously afraid to make a move to wipe my arm because he might think I moved too fast or was being aggressive.

Sometime before I finished the signing, the client’s grown son came home.  Apparently it was his dog. He now had the dog’s undivided attention but I asked the caregiver to get the dog out of the house before I stood up or left the room. I didn’t trust that he wouldn’t be right back at me. It was a little crazy for awhile but I don’t think he was even wearing a collar.

When I arrived home, I looked and had two red marks on my abdomen. The next day I had a 4″ diameter bruise.

Going forward, I will ask callers wishing to schedule an appointment the following: “Does the signer have valid ID?”,  “Is the signer competent?”, and “Do you have aggressive animals who freely roam your home?”

I had a realtor tell me you can’t be too careful.  She had been attacked by a cat which lunged at her neck from a dresser as she walked by.

If you have a large and/or aggressive animal, I will require a credit card deposit for my minimum travel fee which will be charged if I am unable to safely enter your home or business.

Maybe it’s just me but it seems that people don’t have a clue what can and cannot be notarized. It’s possible that some people know but don’t care. Last week I had two calls from people saying they had been told to have something notarized. Somehow we’re supposed to be like fairy godmothers with a…

As a mobile notary, I spend a lot of time in hospitals, nursing homes and private homes. Except for the rare call where someone needs a notary because they work at home or are otherwise unable to leave their home, most calls are because somebody is really ill and a relative or friend is attempting…

Banks may not notarize your documents Many businesses, including banks, are restricting the types of documents their employee notaries can notarize.  Many are only allowing them to notarize documents produced by the bank or corporation. I regularly receive calls from banks on behalf of a client they can’t help. Wills are at the top of…