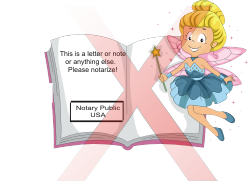 Maybe it’s just me but it seems that people don’t have a clue what can and cannot be notarized. It’s possible that some people know but don’t care. Last week I had two calls from people saying they had been told to have something notarized. Somehow we’re supposed to be like fairy godmothers with a magic wand to grant whatever is asked.

A notary can’t make a certified copy of a government ID.

The first caller had a government form which doesn’t require a notary. This person was told that they needed to have a notarized copy of their passport, driver license and other ID. I explained that these were government issued IDs and “certified” copies would have to be obtained from the issuing agency.

It seems to me that the ID should have been presented to the person at the office collecting the form and that government agency employ would verify the ID. I directed him back to the office where he was given these instructions.

Get the proper form from an attorney.

The second caller had a referral letter from a former employer. An apartment manager had told her that in order for the letter to be valid, it would have to be notarized. There were many things wrong with this scenario but I explained to the caller that I couldn’t simply stamp and sign a letter without a proper notary certificate nor could I tell her the type of certificate needed. Second, the letter maker would be the person appearing if they determined the proper notary certificate.

If your business routinely requires verification of a document or types of documents, see an attorney and get a proper form. Making it up and getting it notarized doesn’t make it legal even if you can find a notary to do it.

If you have questions about whether or not I can help, please ask but sometimes reading the articles on this blog will answer your questions.

Update: Due to Covid-19 restrictions, there are many different rules for visitation. These rules vary greatly by facility so please check with the facility before scheduling an appointment. Need a notary and you’re in the hospital? It’s always difficult when you need a notary at a hospital. You typically have an ill relative and important…

It seems every day is a learning experience.  A potential client calls and you go through the list, do you have valid ID, is the signer competent, where will I be going and so on. As our nation becomes more diverse, there are more calls from people needing documents from another country notarized. The next…

What Is The Procedure? 1. You need to know and understand what you are signing. I am not an attorney and I cannot draw up legal documents, explain their meaning or give you an opinion of them. 2. The signer and I must be in the presence of each other and I must see the…

We get many calls for information.  A common question is “Can you notarize a letter from my boss saying where I work?” Another frequent request comes from people who need documents notarized in order to renew passports or visas.  These documents typically arrive without a notary certificate so one has to be added. The common… 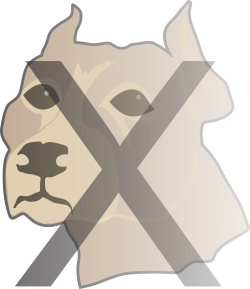 Live and learn.  I’ve been doing the mobile notary thing for several years now without any major surprises…..until last week. It’s common to go to a home where there are pets and the pets rule the roost. They are harmless for the most part. Last week however, I went to a home for a routine…